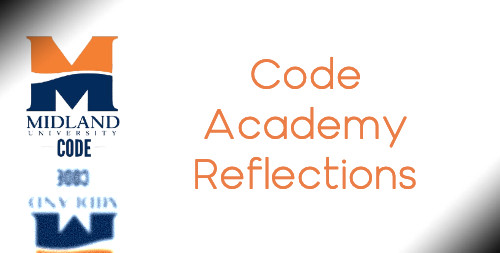 Reflections on the second week of Code Academy

tl;dr Things get real with Javascript and party planning

We finished the second week. That’s a huge milestone. I mean, I guess every week is a huge milestone but it feels like the different between week 1 and week 2 was huge. The first week was ‘the plunge’ and the students we overwhelmed with HTML/CSS. They got used to it toward the end of the week, and then WHAM! The next Monday they get introduced into the crazy world of Javascript. Two huge domains in two consecutive weeks. That’s gotta be hard.

Honestly, they’re learning things in their second week that took me a good year to understand or recognize when I taught myself. I’m becoming a little jealous that I never had the opportunity to learn coding in a class environment. I fell like I would have loved that style of learning. Alas, there’s nothing I can do to change my ‘buy a book and struggle through it’ code journey, but I guess the struggles that we went through make us who we are today.

Thursday of the second week we had our official ‘launch party’. We didn’t want to ‘launch’ too early, since we wanted to make sure the students we were celebrating were committed to finishing the program. If they stuck around through the Thursday of the second week, there’s a damn good chance they are there for the whole thing. I have a great feeling about this bunch, too. I think they’re going to be successful. My fear is that they are going to set the bar too high that we won’t be able to match it.

I’ll tell you right now, I hate party planning. I always fear that things are going to fall flat and be lame. We sent out invites to folks in the community, but it was probably too late to get on everyone’s calendar. We had a handful show up from outside the Academy, but not near what I was hoping for. For these new things, you just have to grind. Keep doing it and keep doing it. It’s going to be unheard of at first, and then ignored, and then people will show up. We’ll get on the ball earlier and spread the word a bit wider next time. Food was good, decorations were good too.

What really made the launch party a ‘success’ was that all of the students brought their family or significant others. It was really cool to see people mingling and talking with spouses and all of the kids running all over the place. I even brought my kiddos, which was risky, but I don’t think they caused that much property damage. Getting to talk to a few of the family member of our students was super fun and the highlight of the night for me. Also, for future reference, do not hand the mic to Midland upper-management without a strict run-through of the program…or you can just throw your schedule of events out the window.

Our first meetup as a group went pretty well. We went to the ‘Learn Swift’ meetup where we learning about a framework and templating language for Swift. Truth be told, no MU students, including myself, knew what was going on. But it was good to get out there and talk with folks. Getting our name out there is important. To get these students hired, we need to make sure people recognize the ‘Midland University Code Academy’ name and have positive thoughts. If they remember us for showing up and taking over meetups, that’s a MASSIVE positive for us. I need to get a larger orange shirt though, or lose a significant amount of weight. May just have to rock the sweater vest to the meetups instead, which has the added benefit of furthering my personal ‘brand’. Ha!

I’m trying to not be in Omaha as much these days. The students are hopfully getting into a rhythm with Mike and the curriculum and I need to be around less as a cheerleader and just focus on giving the students the best experiences possible. OH OH OH! I forgot to tell you…we may have found a new Java instructor! The instructor we had lined up had to drop out (long story) the second day of class. I’ve been beating the pavement trying to find a replacement and may have stumbled across one. I don’t want to speak too early, lest I jinx it, but I’m excited. More details to come!